The parable of the wedding feast

In the parable which we’ve just heard, Jesus likened the Kingdom of heaven, which he was bringing in, to a wedding feast. But there was a twist. The invited guests didn’t come. They were too busy, too preoccupied with other things. And the point that Jesus was making would have been well understood by the religious authorities. It would have been understood by the ordinary folk as well.

Israel’s leaders were like guests who’d been invited to God’s wedding party; a party which he was throwing for his very own son. But they’d refused. God had been planning this party for a long time and the prophets had spoken about it. The Old Testament contains so many references to it that the Jewish leaders really couldn’t claim to have no knowledge of what Jesus was showing them in his own life. However, not only had they killed the prophets who’d tried to tell them about the coming celebration, but even now that the Messiah was here ,they just didn’t want to know.

But the good news that Jesus announced was for those people who hadn’t reckoned on being invited to a feast at all. God was sending out his messengers to the rough  parts of town, and through them he was asking everybody and anybody to come to the party. Prostitutes, nobodies, the blind and lame; the dirty and diseased; even the riff raff, who collected taxes for the hated Romans were invited.

Now, many people have always wanted to believe that this parable is a sure sign that God loves us just as we are and doesn’t want to change us.

People often say this when they want to justify certain types of behaviour. When deep in their hearts they know that their lifestyle is wrong, they’ll argue that God will accept it , because he’s a God who loves all of his children. They’ll tell you they were just made the way they are, and therefore they’re accepted by God and don’t need to change.

Well, although it’s true that God loves us just as we are, it certainly isn’t true that he wants us to remain that way. When the blind and the lame came to Jesus he didn’t say “You’re fine just as you are “. He healed them, and they wouldn’t have been satisfied with anything less. When the prostitutes and thieves came to Jesus he didn’t say ” Fine, you’re OK just as you are “.

His love reached out to them just where they were, but it didn’t allow them to stay there.

Because love always wants the best, they were healed and transformed. Their lives were changed.

So, yes, God loves serial killers and child molesters. He loves arrogant and deceptive business men and he loves selfish parents who make their children emotional cripples. He loves them, but he wants them to change. He hates what they’re doing and he can’t allow them to stay for ever in the party which he’s throwing.

I think this is what that little bit of our Gospel reading today means when it speaks of a man being thrown out of the party because he wasn’t wearing wedding clothes.

We don’t know just how God will provide opportunities for us to change our clothes when we get to heaven. But we can believe that in his kingdom, justice and love and peace, together with mercy truth and holiness will be the kind of clothes which we need to put on.  And if we refuse to put them on we’re actually saying that we don’t want to stay at the party.

But although we may need to leave with God, the preparations which he’s made for us to use when our life on earth is done, we most certainly need to give attention to the lives which we presently lead.

All of the excuses made by the people in the parable were good in themselves. The difficulties for the guests who were invited first of all, came because their excuses showed that particular things were more important  to them, than anything else. Family and business and commerce are good things, but they’re not God.

So, we need to examine our consciences, perhaps quite frequently, in order that we might become more and more aware each day of those things which we so easily and frequently allow to get between us and the kingdom of heaven. What clothes do we need to change right now? What, if anything, is more important to us than God’s reign?

And what are we going to do about it?

Diocese of Plymouth Mass and Prayers 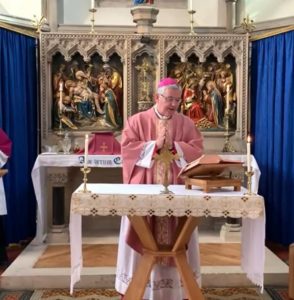 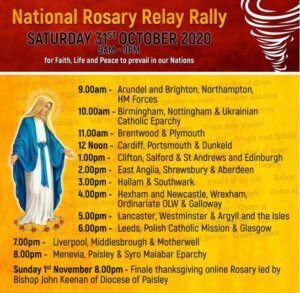